"Beer in Colorado" is dedicated to that divine elixir born of the marriage of water, malt, hops, and yeast as interpreted
by those living in Colorado. Follow the author as he visits every brewery in the state, creates experimental homebrews,
attends beer festivals, tries interesting beers from around the world, and spreads the good word of beer. Prost!

Guanella Pass and Westbound & Down

A re-cap of our visits to Guanella Pass Brewery and Westbound & Down Brewing Company.

Email ThisBlogThis!Share to TwitterShare to FacebookShare to Pinterest
Labels: Georgetown, Guanella Pass, Idaho Springs, Westbound & Down, Westbound and Down

A re-cap of our recent visit to 14er Brewing and Liberati Osteria & Oenobeers. 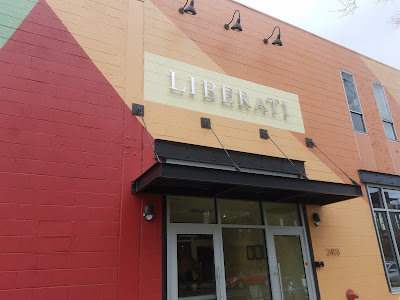 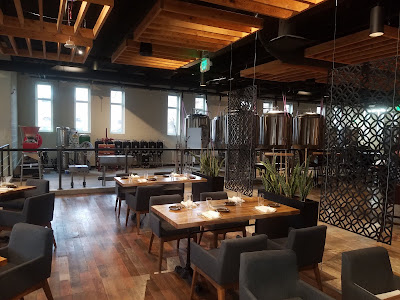 As you likely surmised from the previous post, these kids of ours take up a lot of time and a lot of mental capacity, dulling our senses and making prolonged coherent thought nigh impossible.  Thus, I’m trying a new approach.  I’ll present each brewery visit recap in vignette form: short, self-contained, semi-related, bulleted paragraphs.  Let’s give this approach a spin with Burns Family Artisan Ales and Novel Strand Brewing Company.

Postpartum Blogging: Getting Back to the Beer Grind with Frolic Brewing Company


What have you been up to these past three years?  I can tell you what Nicole and I have been doing—having and raising two kids.  Hence, our prolonged absence from this blog.  Say what you will about children, say they’re the worst thing or say they’re the best thing (both statements are true, it depends on the day) but there’s one undeniable truth—they take up a lot of time.

By no means have we stopped drinking or going to breweries.  In fact, shortly after our first-born, we went on a brewery spree, we were so excited Nicole could imbibe once again.  However, we haven’t been documenting our adventures and, even though we have two little imps sucking up our leisure time, it’s important now more than ever to keep a record.  By the time our kids are old enough to have opinions they’ll undoubtedly think their parents are lame and, frankly, they’ll be right; when one has children one no longer concerns themselves with Fortnite, My Space, La Macarena, or whatever the hell kids are into these days.  The kids need to know that their mom and I were once young and cool, too.  And then I want them to feel bad when they realize they’re the reason we now suck so bad.

So let's start this blog back up!  The family took a little weekend trip to Westminster (somewhat) recently and stopped by The Butterfly Pavilion which is a good, wholesome name to lure kids into the building before pulling the rug out from under them  when all the other creepy, crawly invertebrates on display besides the titular Lepidopterans are revealed.

We gave our children the willies checking out the various spiders, scorpions, and cockroaches and probably traumatized my daughter explaining that the nightmarish giant isopod is what her beloved little rolly-polly bugs would look like magnified before we set out to explore the namesake atrium.  The actual butterfly pavilion was a good way to lull the kids into a false sense of security before telling my daughter there was something she had to do before earning her snack for the day: hold Rosie, the Chilean rose hair tarantula.

Although a bit trepidatious, she actually didn’t mind the experience.  At only three years old she’s not had enough time to develop a phobia.  Nicole held the spider, too, which was more amazing because she has had time to develop a phobia; it’s my duty to swat down every cobweb in the house and squash every little eight-legged black dot that manifests itself on the walls.  Of course, for all my heroics at home, I sure as hell wasn’t touching Rosie.  Nicole modeled her tarantula-holding technique for our daughter so I’ll do the same for our son when he’s older.  Maybe.  I have a few years to think about it. 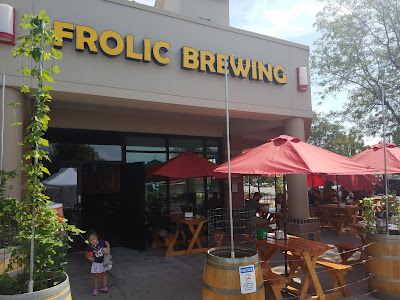 After conquering her fear, Nicole was owed a beer and, after watching other people conquer their fear, I was owed some suds, too, so we headed out to Frolic Brewing Company.  Out in the suburban prairies of Westminster and occupying the endcap unit of a strip mall, Frolic makes the best of a not especially aesthetically pleasing environment with a sprawling patio, a game area with over-sized tabletop games and cornhole, and a few interesting interior design details such as the privacy wall near the restrooms which features grains of various degrees of kilning sandwiched between clear plastic creating an hombre effect.  Plus, a lot of teacher-orientated flags hanging from the ceiling which is a nice touch for an education-centric household such as ours.


After a short father/daughter dance-off on the vast concrete floors, we settled in for a beer.  First, I had the Anaheim Pepper Saison.  I like chili beers so I liked this one.  I don’t know about the whole “saison” part, though; I guess the hot peppers drowned out the fruity, spicy yeast qualities.  Then, a flight of Citra IPA (exactly what you’d expect; an IPA with craft beer's most popular hop), Vienna Lager (silky and malty), and Cranberry Gose (there are some who poo-poo kettle sours but I really don't care about the process; I paraphrase Andrew Zimmern when I say “If it tastes good, drink it!”).

I think I’ll give this blog post the old Irish good-bye and just end it abruptly and without much warning because all this happened over Labor Day weekend and I began writing this post shortly thereafter.  That’s how much time kids will take up in your life, it took me about two and a half months to write eight paragraphs.  If I don’t post now, I never will.

Back in March Nicole and I released the news that we were womb-aging a child and shared a series of weekly photos documenting the progression of the pregnancy.  Well, there have been a lot more pictures since then: 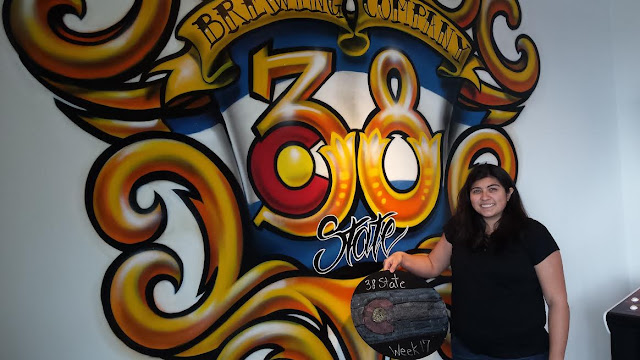 No clever sayings for this one but it was around the time of March 3rd AKA 3/03 AKA 303 Day so we just went with a Colorado pride theme.  I remember 38 State Brewing Company having an interesting taproom.  I believe it was a former mechanic's workshop as evidenced by the many garage doors.  One of the more peculiar (but also neat) features of the taproom was an unfinished-looking side room that served as sort of a rec room.  With big glass garage doors on opposite ends of the room, it almost felt like being outside.  We also visited Locavore Beer Works on this particular trip to the southern suburbs. 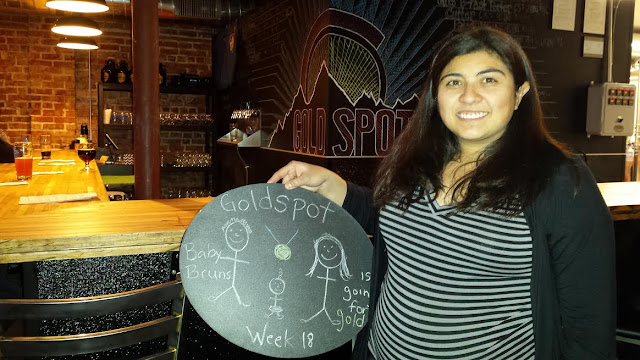 Goldspot Brewing Company's got a quaint little space near Regis University.  A small brick building with low, wooden rafters interwoven with patio-style filament lights, this brewery has the vibe of countryside love shack. 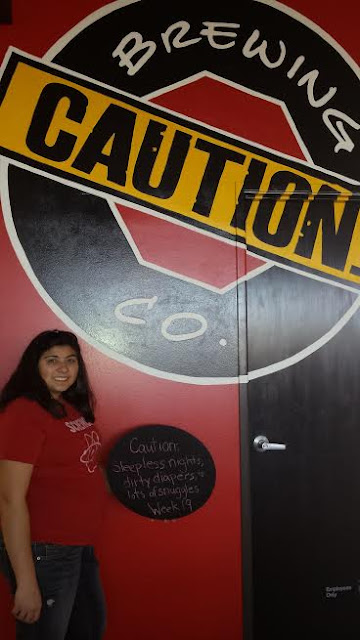 I guess if we're trying to show off the baby-bump we shouldn't have put Nicole in a red shirt and have her stand in front of a red wall. 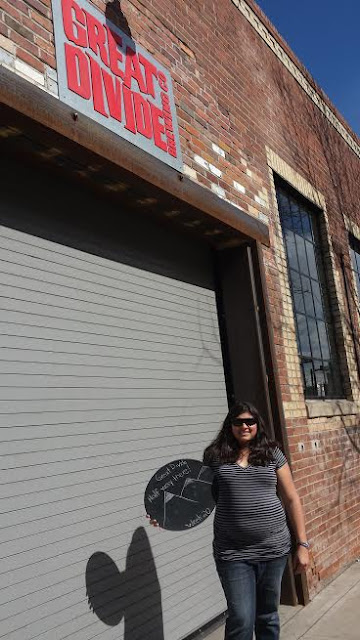 This was taken at what should have been the half-way mark of the pregnancy. 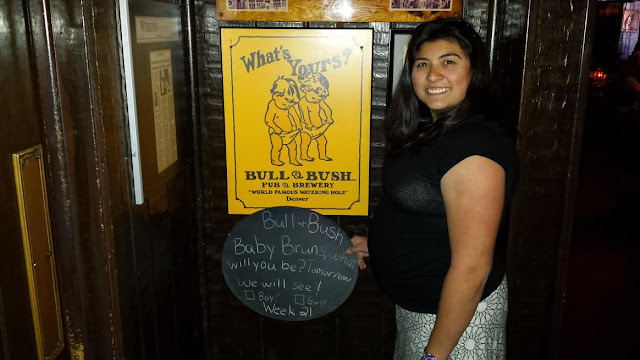 At this point, we had not yet found out the sex of the child.  But, as you can ascertain from our chalkboard, we were about to find out. SPOILER ALERT: it was a girl. 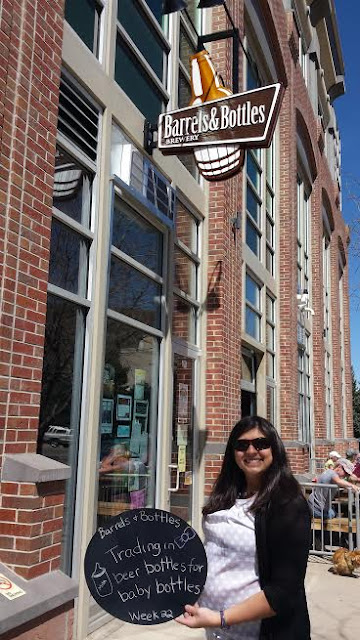 I would like to amend this one slightly.  We're not "trading in" anything, we're simply adding to the bottle collection.  There're still plenty of beer bottles at our residence. 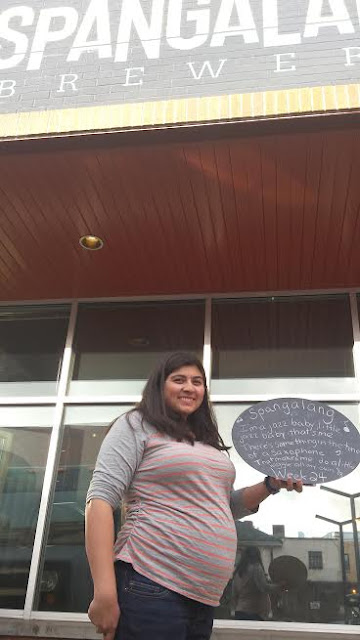 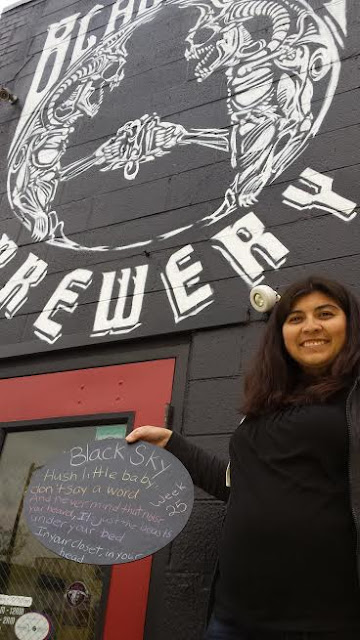 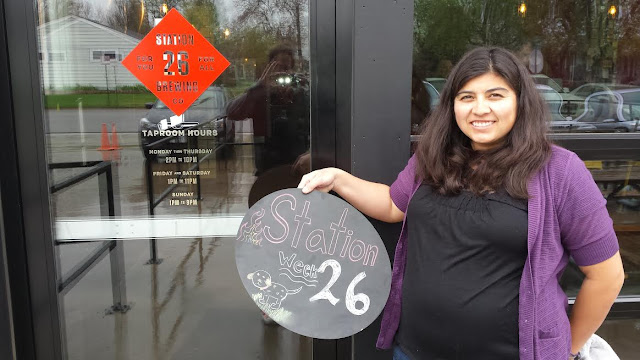 We were at Week 26 of the pregnancy so, naturally, we took our picture at Station 26 Brewing Co. 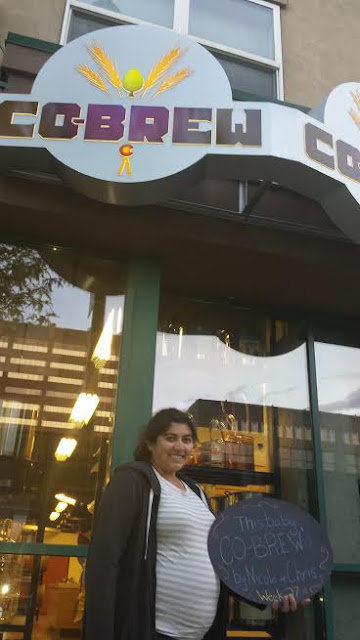 CO-Brew, the homebrew shop/brewery hybrid on Broadway.  At a glance, it's more homebrew shop than brewery but the check-out register is also a bar and there's a seating area off to the side indicating it's dual nature. 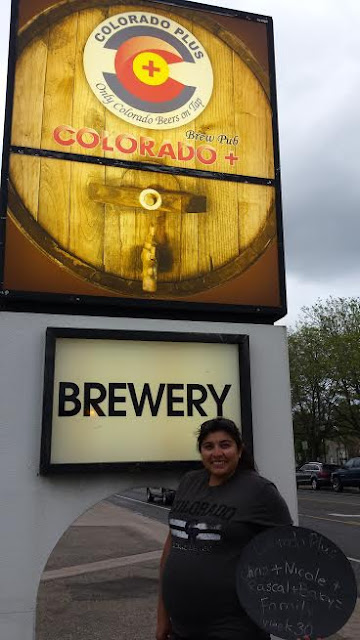 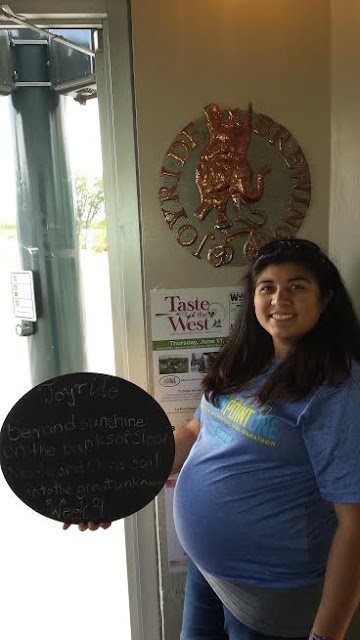 We weren't revealing the baby's name until she was born which prompted a lot of prying questions from friends and family.  So, being cheeky, we composed a poem and snuck her (technically misspelled) name into it.  Nobody caught the hint. 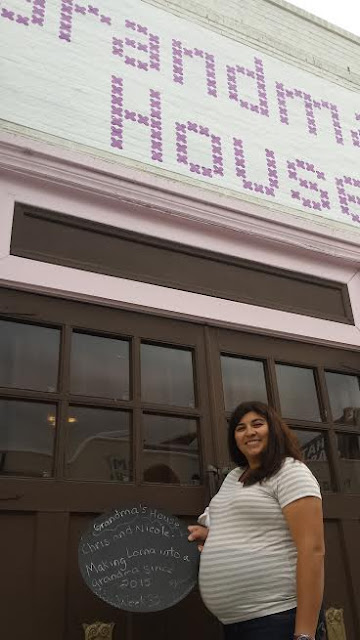 We turned Nicole's parents into grandparents with this baby (my brother already did that honor for my parents). 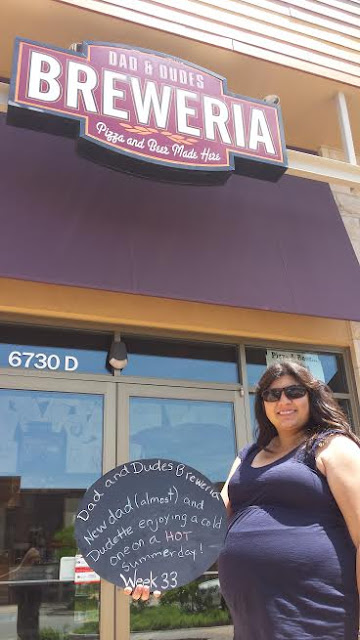 I think this was taken near Father's Day. 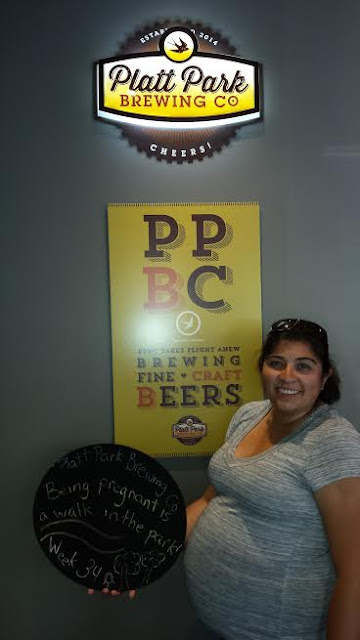 Yes, but the actual giving birth part?  Not so much. 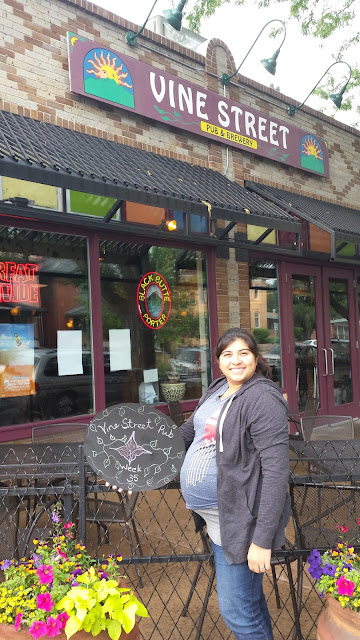 We took this picture out of convenience; it's the closest brewery to our hospital where we were headed to take a birthing class. 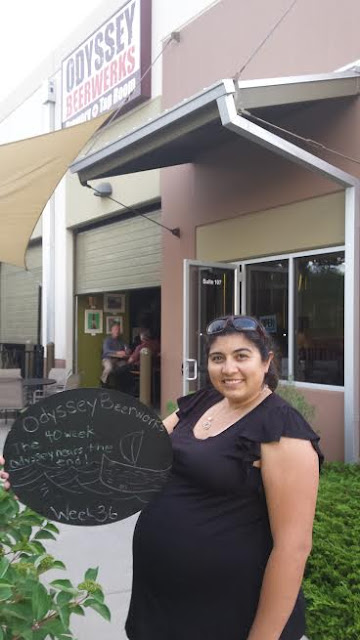 I apologize for the crappy-looking boat we drew. 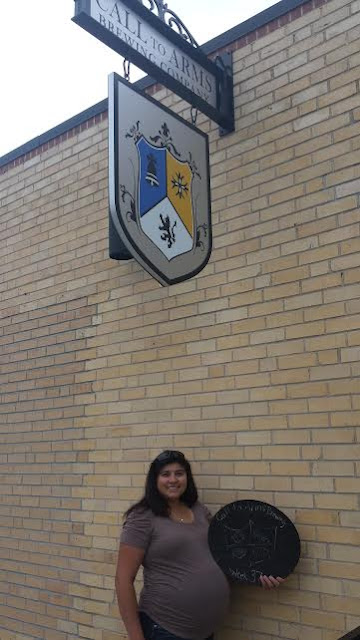 Awesome spot and great beer!  I had their Luntbier, a nearly-extinct style of German smoked beer; it was delightful.  The taproom is a mix of industrial American and classic English pub.  It's in an old barrel-roofed building with lots of garage doors but within the rough-edged matrix floats classic details like a hanging pane of tin ceiling plates and a massive, ornate, dark-wood bar. 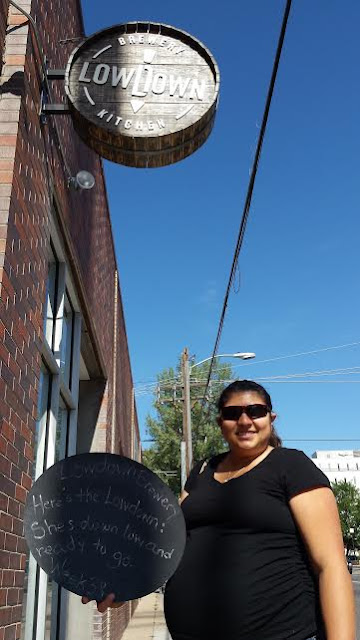 We were actually at a different brewery when we realized we could come up with a better message at this one.  So, we packed up and drove here. 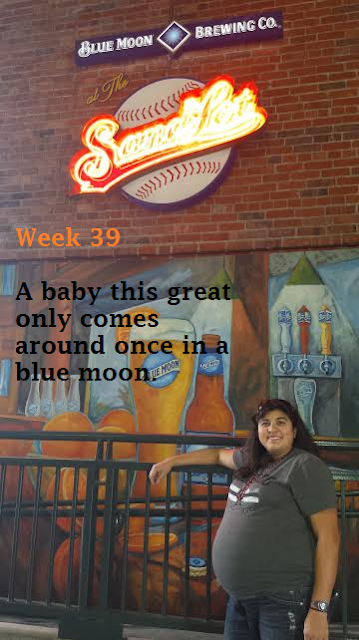 It was actually at about the same time the real, celestial blue moon was in the sky when we took this picture.  As you can see, we forgot our chalkboard for this one. 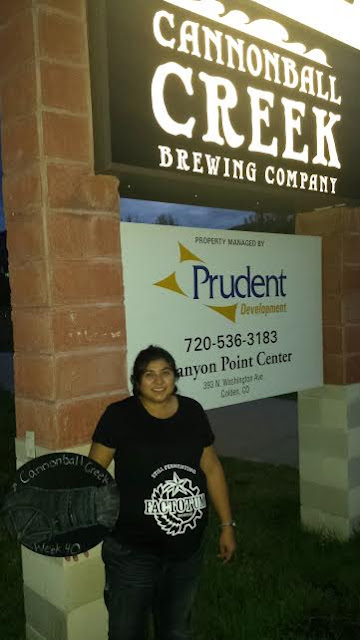 Nicole was overdue at this point; we were ready to blast this little cannonball right out of her! 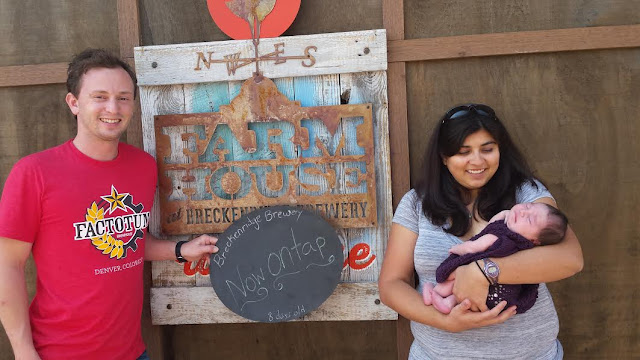 And then, on August 12th, Sloane Viola Jane was done fermenting and was ready to be tapped for the world to enjoy!  I promise she doesn't always look so blobby and disgruntled, the photographer just caught her at a bad time.